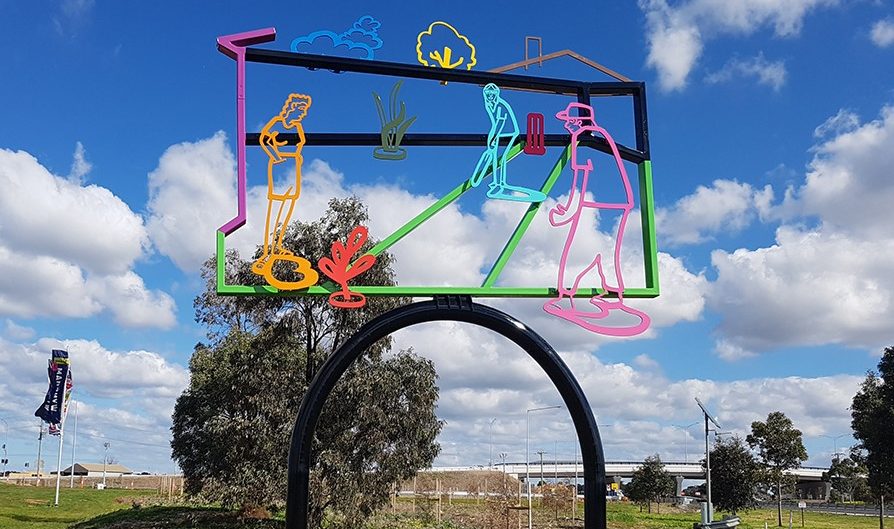 MELBOURNE, AUSTRALIA – Melbourne’s public art scene has a stunning addition, with a new sculpture unveiled alongside the Princes Freeway in Werribee.

Backyard by local artist Jon Campbell represents a stylised pop version of Campbell’s childhood backyard in the nearby suburb of Altona.

Netflow is now maintaining a 260-kilometre road network from Footscray to Werribee for an additional 20 years in partnership with the Department of Transport.

Backyard was the result of an independent commission selection process run by one of Australia’s leading sculpture authority, Melbourne-based McClelland Sculpture Park+Gallery.

An independent selection advisory panel reviewed more than 70 submissions – many from local artists – before making its recommendations to Netflow.

McClelland Director Lisa Byrne congratulated Jon on his work, saying the sculpture will inform and enliven the experience of road users travelling between Melbourne and Geelong.

“Backyard echoes aspects of everyday life including sport and family, linking them to contemporary culture and history through design, colour, sculpture and storytelling. It embodies high aesthetic aspiration and constitutes a significant artistic statement for Melbourne’s western suburbs, and Australian sculpture more broadly.”

Artist Jon Campbell said the sculpture relates to commercial freeway billboards with its scale and composition.

“The backyard was a site of influential activity in my upbringing, playing cricket, family barbeques and birthdays. It was a space in which to dream and allowed me as a youngster to imagine hitting the winning runs or kicking the winning goal.

“There is a myth attached to the backyard and a strong desire to have one. Maybe the backyard is not everyone’s dream, but as a space for connection, contemplation and shared activity it remains a desirable and aspirational goal of suburban Melbourne.”

Victorian Treasurer and Member for Werribee Tim Pallas said, “Backyard celebrates the joys of everyday life in the western suburbs and serves as a visual reminder of the great work delivered as part of the $1.8 billion Western Roads Upgrade.”

Victorian Minister for Transport Infrastructure Jacinta Allan said, “We’ve taken action to deliver the biggest ever single investment in Melbourne’s suburban road network that will serve road users in the west for decades to come. What better way to mark this transformational project than with an eye-catching new addition to the urban landscape in the west.”

“This art is part of a broader landscaping and urban design approach that has provided quality and sustainable public amenity and design across Melbourne’s west,” Mr Uzquiza said.

“In addition to some of our other initiatives that benefit the community more broadly, such as our support of three key non-profit community organisations for 23 years, it is a highly visible reminder of the significant and long-term investment being made by this project and demonstrates the value that can be achieved through public-private partnerships.”